North Korean mountain above nuclear bomb test site is at risk of COLLAPSING, leaking radiation across the region, China warns

US monitors measured a powerful 6.3-magnitude earthquake near the North's main testing site, felt in parts of China and Russia, with an aftershock possibly caused by a rock cave-in.

Experts in China now fear that a mountain - believed to be above the underground chambers where North Korea has staged all of its tests - is under threat of collapse.

Wang Naiyan, a former chairman of the China Nuclear Society and a researcher on China's own nuclear weapons programme, said he feared just one more test could 'take the mountain's roof off' sparking a toxic radiation drift across the region.

'We call it "taking the roof off". If the mountain collapses and the hole is exposed, it will let out many bad things,' he said, according to the South China Morning Post.

He said North Korea had a lack of suitable places for nuclear tests and that the length of time the mountain continued to stand would depend on where exactly the blasts take place.

If they were put in 'difficult and expensive' vertical tunnels, it would do less damage, he said.

But it is easier to make horizontal tunnels, increasing the risk of the mountain collapsing, Wang added.
Click to expand...

Look at this video, such wonderful people. 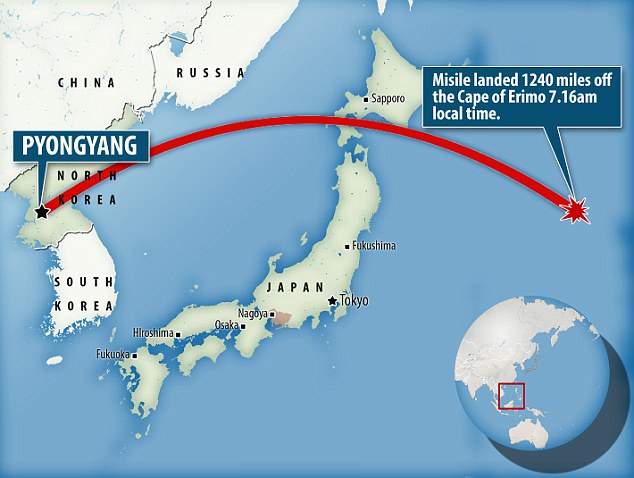 People think Trump is instigating this but who is the one firing missiles over neighboring countries?...

FFH said:
Look at this video, such wonderful people.

I think with any country under the rule of a dictator and the military it's never the people who are the aggressors, but the government and military for allowing this to happen...

The people in the video for the most part seem fine, but some can ask if the appearance of the people were staged for the camera or is the the norm throughout North Korea or is it really as hard on the people as so many who visit there say it is?...

There was a story on CNN last night about North Korea. One of CNN's correspondents, Will Ripley, was allowed access to talk to local people as he traveled the countryside.

Secret State: A journey into the heart of North Korea

While I found it to be interesting, there were no real surprises. All of the people he spoke to were very careful and guarded in everything they said. When speaking to some young people he mentioned that he liked classic rock and asked them what kind of music they listened to. All of them said they preferred the music of their glorious leader, etc. No one would admit to liking anything western.

The story mainly talked about North Korea and the United States. I've always wondered how the South Koreans feel about all of this. What if the US decided to pull out and let the 2 Koreas settle things for themselves? Would South Korea object to this? Would war ensue?

Trump says "North Korea will be destroyed"... that's telling them. U.S. warns that time is running out for peaceful solution with North Korea

A War with North Korea will never happen Simply Because of these statistics Nuclear arsenals | ICAN Also, The video about Trump hitting Hillary with a Golf ball was hilarious. Just like Trump Pile Driving CNN was hilarious. If you are a true Egalitarian that is.

Aren't we technically still at war.?

Yes, the sanctions would make it an economic war.

Published on Sep 26, 2017
New York Congressman Lee Zeldin (R) on the fallout from a North Korean official threatening to shoot down U.S. bombers over the Korean peninsula.
Click to expand...

Toroid said:
Yes, the sanctions would make it an economic war.
Click to expand...

No I mean actual war mate, didn't the Korean war just end with an armistice not an actual end to the war.

Fen Star said:
No I mean actual war mate, didn't the Korean war just end with an armistice not an actual end to the war.

As my understanding goes Fen that is correct, the Korean war never actually ended, it just dis a giant cease fire.

The peaceful person in me says find a diplomatic solution, but the primal bit says wipe the bastard of the face of the earth. The only problem is you can''t do that to just the mad man and his cronies. So many innocent people who are victims of his tyranny would pay. I am just glad it is not me that has to make these decisions. There is no easy solution.
C

ain't gonna be a nuclear war. and if by chance the 'big flash' does arrive. hope everyone has lived their lives as fully as they wanted to, thus farly. why wait 'til spring. love it.

Otto's corner report claims he wasn't tortured. His father said it looked like they rearranged his teeth with pliers and there were ten scars on his body. If they want to demonize NK then why not officially say he was tortured?
Coroner's report contradicts Otto Warmbier torture claims | Daily Mail Online

Toroid said:
Otto's corner report claims he wasn't tortured. His father said it looked like they rearranged his teeth with pliers and there were ten scars on his body. If they want to demonize NK then why not officially say he was tortured?
Coroner's report contradicts Otto Warmbier torture claims | Daily Mail Online
Click to expand...

The whole situation with Warmbier could have been a great opportunity for propaganda. They could have claimed they're kind and benevolent and let the kid go home unharmed.

I think the objective was to get him out of NK before he died.