I believe there are actually two distinct strains of the virus that give positive test results for covid-19. Consider the active cases per 100k population over time for these countries 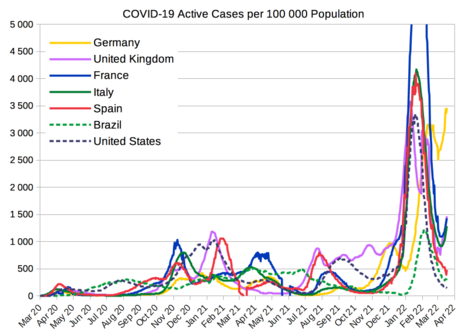 In theory the curve should look very gaussian like Spain's curve between 1 mar and 1 Jul. Shoddy or dishonest book keeping leads to a curve like Sweden's. However notice how Spain almost returned to zero and is starting up a nicely shaped larger curve. Despite the poor book keeping in other countries you can see a similar patters. A hump that started dying out of the population and then another lager one. When the second hump begins to rise is time shifted for various countries. I think what happed is that the virus mutated a strain to which fewer people are highly resistant or immune, and then started spreading to other countries. As you see from the united states curve the cases are dropping fast from the second hump. In other words essentially everyone who wasn't highly resistant or immune already got it and are now recovering. The fear mongering from corporations and local governments, will go on for some time so that when enough vaccine for 19 is made in order for them to force us to pay to take, people would do it. Then what you will likely see is this chest cold will mutate to new strains now and then just like it always did when we blew it off as a cold. Because of this coronavirus vaccination for the various covid strains will become a seasonal ritual just like flu vaccination. The fear mongering will be continued to force the masses to take it, by law or job or school requirement.
At that point depopulation becomes as easy as tainting the supply to sterilize women.
You must log in or register to reply here.
Share:
Facebook Twitter Reddit Pinterest Tumblr WhatsApp Email Share Link
Top