Series of UFO sightings which occurred over New Year's day in Cowichan and Mill bay, Canada, 1970 - in one of the incidents a nurse from the local hospital opened the curtains of a third floor room only to see a saucer shaped object with 'entities' inside it manipulating the controls.

The following is from an audio cassette of pioneer physical trace UFOlogist Henry McKay talking about a report of a UFO hovering outside of a hospital in Duncan, British Columbia in 1970.
Click to expand...

Dr Michael Swords also discusses the case below (which he describes as an 'outstanding CE3 incident') and mentions the fact that other hospital staff also saw the object. 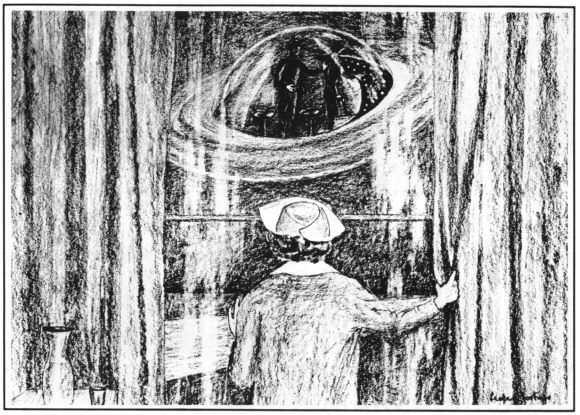 In the early morning hours of New Year's Day 1970, a Canadian nurse, Doreen Kendall, pulled open the curtain in a patient's room in the Cowichan District hospital, and according to a newspaper article (in the Cowichan Leader), she later reported what saw was during her night schedule at the hospital like this.

"Just as I pulled the drapes a brilliant light hit me in the eyes," she said. "It was still dark outside, but about 60 feet away right above the children's ward, there was this object so big and bright I could see everything clearly.
"The object was circular and had what I guess you would call a top and bottom. The bottom was silvery, like metal, and was shaped like a bowl. There was a string of bright lights around it like a necklace. The top was a dome made of something like glass. It was lit up from inside and I could see right into it." 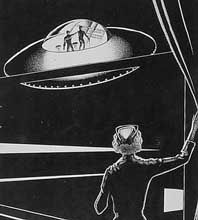 How Nurse Kendal described the incident to the newpaper 'the Cowichan Leader:

"There was a brilliantly lighted dome, occupied by two human-like men, which was stationary in the air about 60 feet away from CDH, above the second floor where I was working in the extended care unit. I was so taken with the flying saucer that I didn't call anyone. I felt mummified and fascinated and stood there for about five minutes watching before I called another nurse, Mrs. Freda Wilson".

The craft, which was slightly tipped downwards toward her was about 50 feet in diameter, or about the width of five hospital windows. While the craft hovered above her, she could see only the upper half of the figures, but when the vehicle tilted she saw their full profile. They had nice physiques, more than six-feet tall, and their hands were the same color and shape as ours. Their faces were covered and they wore dark suits, like a pilot's uniform, of soft-looking material.

"Maybe because I'm so mechanically minded, but I suspect they were having mechanical trouble and had stopped to make repairs". She said one man stood over an instrument panel made of chrome, and the other stood behind him. There were stools for them to sit on. She described the saucer-shaped craft as silvery, metallic with a necklace of lights around the middle. It made no sound while it hovered above her or even later when it took off southward. While watching, one man turned and looked directly and put his hand on the back of the man sitting down.

The other man then pulled back 'a joystick' similar to those in a big airplane and the object tilted sideways giving her an even better view of the instrument panel and interior. She noticed that the dome seemed to be lit from below rather than from above. When it started to pull away, I realized no one would believe me and I ran and called Mrs. Wilson to come and look.
Click to expand... 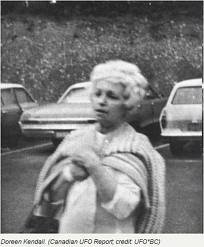 
I decided to look at some of the other cases in 1970 as well. My own files are a bit slight of numbers there but still contain >50 cases of which I find >30 pretty interesting. One of the most outstanding, which has been mentioned in this blog earlier, and which was also mentioned briefly in DATA-NET, is the Doreen Kendall encounter from Cowichan, British Columbia.
This is an outstanding CE3 incident wherein a nurse at a hospital saw a domed disk with a transparent bubble and entities inside "pause and display" itself outside the facility window. This pause-for-effect business reminds me of the Moreland incident in Blenheim, NZ with approximately the same appearing craft. The fact that other staff members saw the craft as it moved away makes this a powerful and puzzling CE3; maybe one of the best. 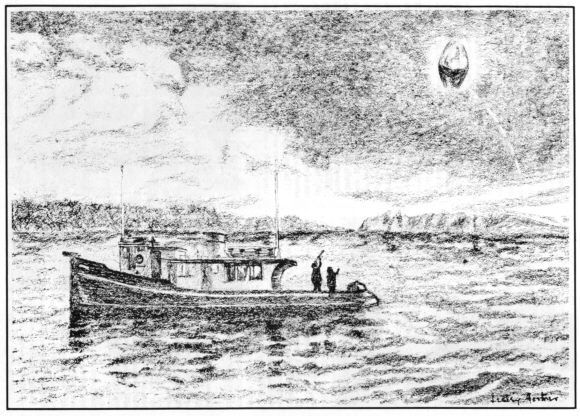 On New Year's Day, 1970, Jim Drummond, age 22, and his wife Dianne, 18, reported studying a bright light in the sky at Mill Bay, through a telescope.

"It was about seven o'clock and Jim and Dianna were still on the boat, anchored close to shore, when I went outside to call them in to dinner," she said. "Then I noticed a light in the sky moving over the bay. I couldn't tell how big it was, it was so bright, and it had a yellow-orangey glow like sunlight.
"I looked up and saw this light coming in from the north, just about in line with our boat. It was skimming right under the overcast which was about 900 feet.
It was sort of egg-shaped, in a vertical position, but the top and bottom were indistinct.It seemed to be transparent on top, and inside it I thought I could see a set of lights but I couldn't really make out any details.
Just at that point something came out of that thing which by then had slowed down almost to a stop.
It was a ray of light like a very thin neon tube, and it was in pieces, something like the dots and dashes of morse code. It came down in a curve and then it flashed right out, all of it at the same time. My hair just stood up on end. I couldn't imagine anything like it."
Jim Drummond -Shipwright
Click to expand...

Witness gets a visit from the military: 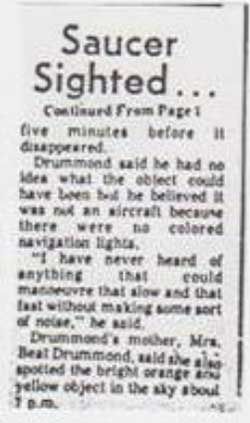 ..Later, Jim Drummond told the investigator that he was visited by a military man from Nevada. The investigator wondered if that man could have been from hanger 51 or Norad.

Later, Jones called and left a message for him to call her. She had read the January 7th, 1970 article from the Cowichan Leader and on April 17th 2008, Leanne Jones talked again with Jim Drummond.

Jones asked him if the article was accurate and Jim replied:

"Yes, but the part about the neon tube-like thing that came out of the object, carrying along the tube flashing 'pieces of light' much like a Morse code was not in it."

Then Drummond said that that element of the story was particularly interesting to the military man who visited him after the sighting. The investigator asked Drummond if the milirary man might have been from Area 51 or NORAD. Drummond replied:

The investigator asked Drummond if it was the "Blue Book Project" and he replied, "That's it."

It is also possible that Mr. Drummond's "USAF military man" was using Project Blue Book as a cover for his true association, most likely, AFOSI, the Air Force Office of Special Investigations, which was then beginning another UFO investigation project, as many UFOlogists suspect, but under a code name that we still do not know.)
Click to expand...

Other UFO reports from the same time and area - first one involving motorists witnessing a UFO in front of a farm and another sighting involving the town Mayor. 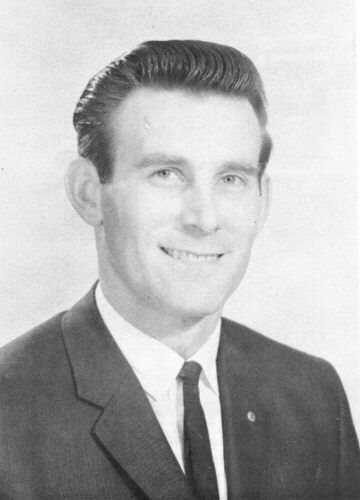 Phoning James Quaife, the mayor of Duncan, on a tip, we learned that one night in January, he and his wife and several neighbors, watched a light many times brighter than a star perform spectacular manoeuvres in the sky, including dead stops and reversal of direction.

A month later after the excitement seemed to have died, John Vanderhoek, who lives on a farm by the Vancouver Island highway, phoned to say that motorists were crowding up in front of his place to watch a "red thing in the air" that was putting on quite a performance. He described it as rising and falling, and changing in intensity as it did so. Above the reddish light there appeared to be a white one, and the object was in motion despite a complete absence of wind. As he spoke the light moved toward mountains to the west and disappeared.

That apparently marked the end of the Vancouver Island flap, at least for the time being. But it might be well to explain that the Jan. 1 sightings did not really mark the beginning. In December there had been a scattering of sightings north of Duncan, and in one case the object sounded very similar to that reported by Vanderhoek. It was glowing white on top and red on the bottom.

Another strange UFO witnessed by a teacher, two aides, a school secretary and two students. 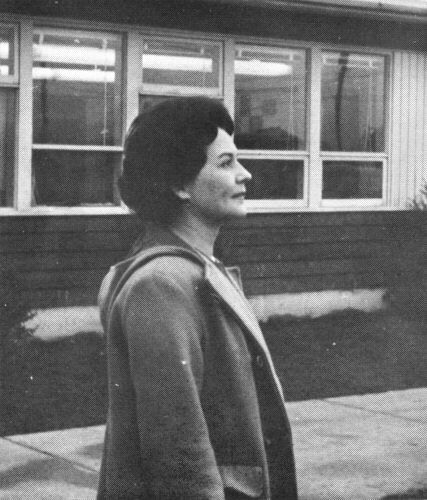 ..but the most striking of these earlier incidents occurred one morning above Duncan's Alexander elementary school. The object in this case was ring-shaped and, as it moved silently overhead, was observed by a teacher, two aides, the school secretary and two students.

"The ring definitely looked as if it was made of some solid substance," Mrs. Edith Beiling, one of the aides, told us. "It was like a very large heavy hula hoop and the material looked like thick rolled-up plastic. It seemed to change in size slightly, perhaps because it was moving up and down, and we didn't have any real idea what size it was but I'd say a large plane could have fitted into it about 15 times.

"We saw it through a window from inside the school at first, then we rushed outside to get a better look. We were all pretty excited, and I think there was one who was even quite frightened. I felt like ringing the school bell but decided I had better not."

Mrs. Beiling explained the day was heavily overcast at the time and consequently it was difficult to say whether they were staring through open space in the middle of the craft, or whether the center was made of some material matching the clouds in color. But there was no doubt in the witnesses' minds that they were looking at a solid object, not at a smoke ring. After about three minutes the object was lost from sight.

karl 12 said:
Series of UFO sightings which occurred over New Year's day in Cowichan and Mill bay, Canada, 1970 - in one of the incidents a nurse from the local hospital opened the curtains of a third floor room only to see a saucer shaped object with 'entities' inside it manipulating the controls.
Click to expand...

That was a really interesting account, I never heard of this incident before either...Its certainly not the first time witnesses have seen occupants inside a UFO...