I have to agree with the store clerk, she must take it off or leave the store...That store is in a violent area and precautions must be taken... 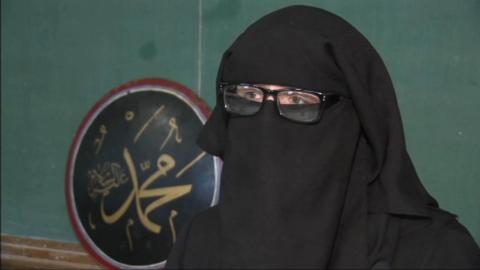 A Muslim woman from Gary, Indiana, said she felt discriminated against after she claims a worker at a Family Dollar store told her to remove her niqab or leave.

Sarah Safi, 32, said she went into the Family Dollar on Garfield Street Monday afternoon to buy charcoal for a family barbecue, ABC-owned station WLS reported. Safi was fully covered, as she says she always is when in public.

"I might have made it 10 steps into the store and I hear the lady behind the counter say, 'Ma'am, you need to take that off your face or you need to leave my store,'" Safi told WLS.

At that point, Safi said she started recording the incident on her cellphone.

The cellphone video, which Safi uploaded and made public on her Facebook, starts with Safi, who can be heard asking, "You're telling me I have to leave this store?"

An employee replies, "Yes, ma'am. If you can't remove that from your face then you need to leave the store," the video shows.

Safi tries to explain what she's wearing "is a religious garment."

The employee replies: "I understand, but you have to understand, too, that this is a high-crime area where we get robbed a lot. You need to remove that from your face or remove yourself from the store."

The employee later adds, "I am the manager, and I'm telling you to leave my store," the video shows.

Safi then says on the video, "This is a country where it’s freedom of religion and it’s freedom of speech. I have a right to wear whatever I want to wear. There’s women that come in here with bikini tops on," the video says.

The employee appears to say that "the cops [are] coming" but Safi replies, "No, I'm leaving" before appearing to exit the store.

Outside, Safi says, "May Allah help this world right now," before the video ends.

Safi told WLS that since she had four children waiting in her car outside, she just decided to leave.

"Do I wait for the police to come and let my children see this, or do I go ahead and just go and let Allah handle it how He sees fit?” she said. "I've never been to an establishment and been treated like this."

Safi added that she has been covering her face in public for years and that the only thing she wants is for the employee in the video to apologize.

"I would like to sit with her and speak to her about what I believe in, because maybe if she heard and really listened to what I believe, I would open her heart," she told WLS.

Safi did not immediately respond to ABC News' requests for comment.

An employee from the Family Dollar store in the video told ABC News today the store's manager was declining to provide comment on the incident.

Williamson did not immediately respond to ABC News' requests for comment.