wwkirk said:
Season 1 is being broadcast on CBS on Thursday nights.
Click to expand...

I had a hard time watching season one, some episodes were a bit confusing, that was last year...I hope by watching season 3 unfold I'll fall back and watch the first two seasons...

Here's a review of the first episode of season 3...


[*]I like the idea that it’s a big shock that Andorians and the Orions are working together. Who could have predicted?


[*]Maybe next week we’ll see how Discovery fares on its first few Michael-free days in the future? Hopefully the gang will get back together relatively quickly, at least.


[*]The event that destroyed most of the dilithium crystals was called “The Burn,” but I’m sure that won’t be important later.


[*]The big new future innovation, apart from the end of the Federation? Portable transporters. This seems like a very dumb idea, right down to the big fight sequence that has Book and Michael Nightcrawlering their way across the planet to escape pursuit. But hey, it’s handheld, so that means it’s cool.


[*]“All time travel technology was destroyed after the temporal wars.” Hey, that sounds like a pretty cool story, why don’t you do a show about that.


[*]“Hope is a powerful thing.” “Sometimes it’s the only thing.” Look, I know that sounds pretty, but I’m going to need a bit more than that, okay? Right now it’s a bumper sticker.

Star Trek: Discovery has no chill. It’s probably my biggest problem with the show—the way it’s constantly hitting the same three or four emotional beats with little regard to narrative logic, structure, or pacing. I don’t mind a show with big feelings, and there are times when Discovery’s broader strokes have worked for me. “That Hope Is You, Part One” is not a terrible season premiere,and if it’s not the reinvention I was hoping for, it doesn’t immediately fall apart first thing out of the gate. But it’s also pretty much the same show we left behind in season two, for better and worse, and that’s evident even before Michael Burnham manages to reconnect with her old crew and the Discovery itself. This is still a show more interested in manipulating the audience into caring than trusting us to get there on our own terms. That’s a bad sign for any series. For whatever reason, it just feels worse coming from a Star Trek show.

The last time we saw Michael, she (along with Discovery and a group of her friends) was throwing herself into the future to save all life in the universe from being destroyed by a malevolent A.I. named Control. The premiere picks up more or less where we left off: Michael pops up in the year 3188, bounces into another ship, and then crashlands on a nearby planet. The suit is damaged in the process, and there’s no sign of Discovery when Michael uses her communicator, but she is able to send the suit back through the closing wormhole in order to deliver the final signal and then self-destruct.

It’s all very intense, with Sonequa Martin-Green damn near hyperventilating through half a dozen reactions. (Terror before the crash, fear when she uses the suit’s sensors to see if there are any life signs, exhilarated joy when she learns the plan apparently worked, back to panic again when she hears the wormhole is closing.) Given that this is picking up directly after the previous season ended, that rush makes sense, but it’s also a mild disappointment. I was hoping the new season would begin at least a week or two after Michael had arrived, getting to the really interesting stuff without getting bogged down by crossing the t’s of the previous season.

Really, though, that’s a preference, and not necessarily a critical observation. It’s more that the lack of space (heh) leads to an overall feeling of familiarity throughout the episode, that once more, we are right up in Michael’s face for everything, and once more, it pretty much all revolves around her. I never really thought about it before, but while previous Trek shows have had central protagonists, only the original series put as much emphasis on its lead (Kirk) as Discovery puts on Michael. And even then, while Kirk was almost always in charge, that show never felt quite as locked in to his perspective as Discovery is to Michael’s. It’s an on-going joke about how it seems like whenever the universe is in danger, the Enterprise is the only ship available to save the day; Discovery decided to double down and make sure the prevention of the end of all life revolved around Michael working through her mommy issues.

Am I being harsh? I suspect I am; and judged only as a story, “Hope” is breezy enough. I like Book, the courier whose ship Michael rams into when she arrives in the future. He’s very clearly being set up as a potential new love interest—they start off as antagonists, they’re forced to fight together, he turns out to be a super upstanding dude and he takes his shirt off at one point—which is fine; even better, he’s got his own agenda, and is sarcastic to Michael, which is appreciated, even if she’s already managed to win him over to her point of view by the end of the episode. There’s some fun “monster” stuff; when Michael runs into Book, he’s in the act of liberating a giant slug beastie, and we get to see the beastie in action as it chows down on all the bad guys before being delivered to its new home. The idea that the Federation has completely collapsed has some promise, as it means that the Discovery is going to need to chart its own course going forward, and it’s arguably the biggest break from previous Trek shows.

It’s just, well, we’re barely into season three, and already Michael has made contact with a former Federation outpost, and is making plans to bring the whole system back. She’s seen, what, two locations? It’s possible that the future is a depressing hellscape in desperate need of some uplift, and the city on the planet where she crashlands (which is apparently the only city on a planet largely devoid of habitation; does no one commute?) isn’t exactly a haven of law and order. I also don’t expect the season to give us a clear and complete picture of everything right off the bat, especially not if it’s choosing to stick this closely with Michael in its premiere. But some context would be nice.

As is, it’s just another one of Discovery’s “uplifting” moments where inspirational music plays and Michael gets that determined look in her eyes, and we’re supposed to be inspired as though just the act of believing in something is heroic, without regard to what that something means. The Federation wasn’t a perfect organization. It wasn’t so bad it deserved to be destroyed, but it also wasn’t King Arthur and Camelot. And apart from a few scattered comments from Book (apparently dilithium is a lot rarer now, so I guess Discovery’s spore drive is going to central once again), we don’t know what 3188 is really like. We don’t know if it needs the Federation. This isn’t even a bad set-up for a season-long arc, it’s just so quick to assume we’ll automatically care that it doesn’t bother explaining why it matters.

That could just be pessimism on my part. After all, the episode does manage to tell a simple but effective little short story about Book bringing endangered species back to a place where they’ll be protected, and it’s entirely possible that the reason of the season will actually put in the time to answer the question this episode appears to be raising: what does the Federation mean in the future? And how can Michael and her friends help? I’m going to keep an open mind as best I can, and at least take comfort in the knowledge that we aren’t going to have to spend half of each review debating whether or not it matters if Discovery breaks continuity. Welcome to the World of Tomorrow! Mind that first step.
Click to expand...

This is a critical review of Star Trek Discovery, which I have to agree with, season three is a huge disappointment in my opinion...

nivek said:
This is a critical review of Star Trek Discovery, which I have to agree with, season three is a huge disappointment in my opinion...

Michael is a 'crying space Jesus' love it . That's funny. Great clip and true to. Thanks for posting it. 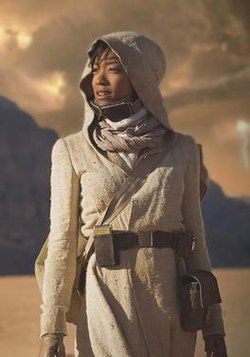 Season three was the worst, too much crying, my god why are they destroying Star Trek...?

nivek said:
Season three was the worst, too much crying, my god why are they destroying Star Trek...?

Tilly wants flushing out the airlock.

Yep, unfortunately Star Trek has been destroyed much like Star Wars has with Marvel now following this mess over the cliff...

Seth McFarland's show is much closer to a real Star Trek show than Discovery or Enterprise ever were. Voyager was fun until the last season when the director let his teenage son write the scripts. (I make that up because I can't think of any other reason the shows were so bad).

I have to say I like Voyager as my favourite of all the Star Trek series...

JahaRa said:
Seth McFarland's show is much closer to a real Star Trek show than Discovery or Enterprise ever were. Voyager was fun until the last season when the director let his teenage son write the scripts. (I make that up because I can't think of any other reason the shows were so bad).
Click to expand...

One of the things I liked about Voyager was that Captain Janeway almost always held to Star Fleet principles in the face of sometimes overwhelming adversity, she made it work because of good writing...Yeah the last season was a bit weak, but also the Kason story arc seemed too drawn out in seasons one and two...The Kason were a bunch of regional thugs and I think they got too much attention, they could have wrapped that up quicker...Overall Voyager is entertaining to watch...

I read that real reason for Star Trek Discovery going about a 1000 years into the future was so the writers can do far less damage to Star Trek canon...The powers that be didn't want to cancel the show but they also grew weary of the show stepping all over canon...