I may have mentioned this on this site before but I am going to again because I need answers. I’m not sure if I’m going to get them here but here it goes.

When I was 5 I started seeing an owl at my window every night at the same time. It got to the point where If I woke up I wouldn’t even look at the window I would just hide under my covers. I confirmed these memories with my mom and aunt who said I used to talk about the owl all the time. They said it was good luck but I remember being terrified of it. Whenever I would see it I remember I would stare at it and then be so terrified but the next thing I knew I was waking up in bed like normal. However, I started having really weird dreams during this time about laying on a white floor and being transparent while worms crawled through my eyes. I also had dreams of getting poked with a giant needle that would pierce my whole being somehow and it was the most uncomfortable feeling ever. It was horrible, it felt like it was actually happening. The worst ones were when I would be forced to watch the “monsters” do unthinkable procedures on people I loved. So horrible I can’t even type it out. I had these same dreams constantly. This went on for years and then stopped once we moved. This experience was in Washington state.

I summmed it up to severe night terrors until a movie came out called The Fourth kind.
This movie takes place in the Northwest America.
It is about how the owl they see at their window is actually an alien.
And then later in life the aliens come back for them and they go insane.

Now I can’t stop thinking about it.
If you’ve seen this movie you know that they get hypnotized, but that makes it worse.

I also have all the signs. A scar behind my ear, technology acts weird around me, terrible fear of bugs, missing time, weird clairvoyant abilities, etc. you name it.

What should I do? Any thoughts on this?
Apparently it was based on a true story but got debunked but this ACTUALLY happened to me and I needed to post this in case it happened to anyone else.

Ignore the owl, it is just background. The real world is not concerned with these monsters in our dreams.

It sounds like you were being abducted and they were using you to generate loosh (negative energy) by depicting frightening things. There are accounts of aliens and/or the Grays making people clairvoyant. I believe that's in a book 'UFO's Over Topanga Canyon'. The author Preston Dennett has been a guest on Coast to Coast AM several times. In the book 'The Threat' the Gray hybrids threatened to harm the family of one of their female projects who set up surveillance equipment in her residence to catch them. The owl could symbolism wisdom or Moloch. It could have been a Gray because they use screen images of other beings.

Kchoo said:
Ignore the owl, it is just background. The real world is not concerned with these monsters in our dreams.
Click to expand...

The 'real' world is not concerned with our dreams, much less what's contained within them...

Kchoo said:
Ignore the owl, it is just background. The real world is not concerned with these monsters in our dreams.
Click to expand...

The owl was real though. I actually saw it

Mike Clelland has extensively researched the role of owls in UFO contact and abductions.


The Messengers: Owls, Synchronicity and the UFO Abductee 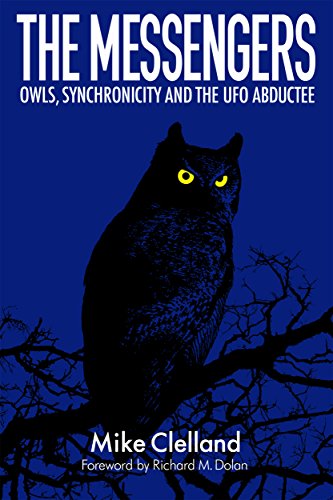