Radio shack should just die lol...Some of those other stores just grew too big in my opinion...

The collapse of retail is accelerating. Over the span of the last week, three more iconic companies have reportedly hired bankruptcy advisors in an effort to stay alive.

Toys R Us, which was once considered the King of toy stores has seen sales and traffic to their stores decline sharply over the years. This is mostly due to the increase of consumers choosing to do their shopping online (Amazon), as well as increased competition from Target, and Walmart.

Even if they can miraculously pull off a comeback, Vitamin Worlds days are numbered. Aside from competition from usual suspects like Amazon, there has also been an abundance of new competitors like Infowars Life and the Health Ranger who are willing to put out better products at a much lower price.

Bon-Ton which operates of a majority of their 260 department stores in the dying mall arena under the names of Bergner’s, Boston Store, Carson’s, Elder-Beerman, Herberger’s, and Younkers is sinking fast. According to reports the company is faced with $900 million in debt and reported a net loss of $33.2 million during the second quarter.
Click to expand...

Ala video killed the radio star

Soon all highschool dropouts and illegal aliens will be pushing boxes at amazon/Ebay , to supply the e-buying frenzy

And China will be the only factory left on Earth

What will happen when more n more ppl realise they can "work" and live life in the virtual interconnected worlds ?

The traditional blue-collar working class will be the only ones visible on the streets in the real world.

Holdings smartphones and takin orders from the virtual ppl.

Book World announced they'll close all 45 of their stores. They're having a liquidation sale at all the locations.
Book World closing chain, including Mason City store 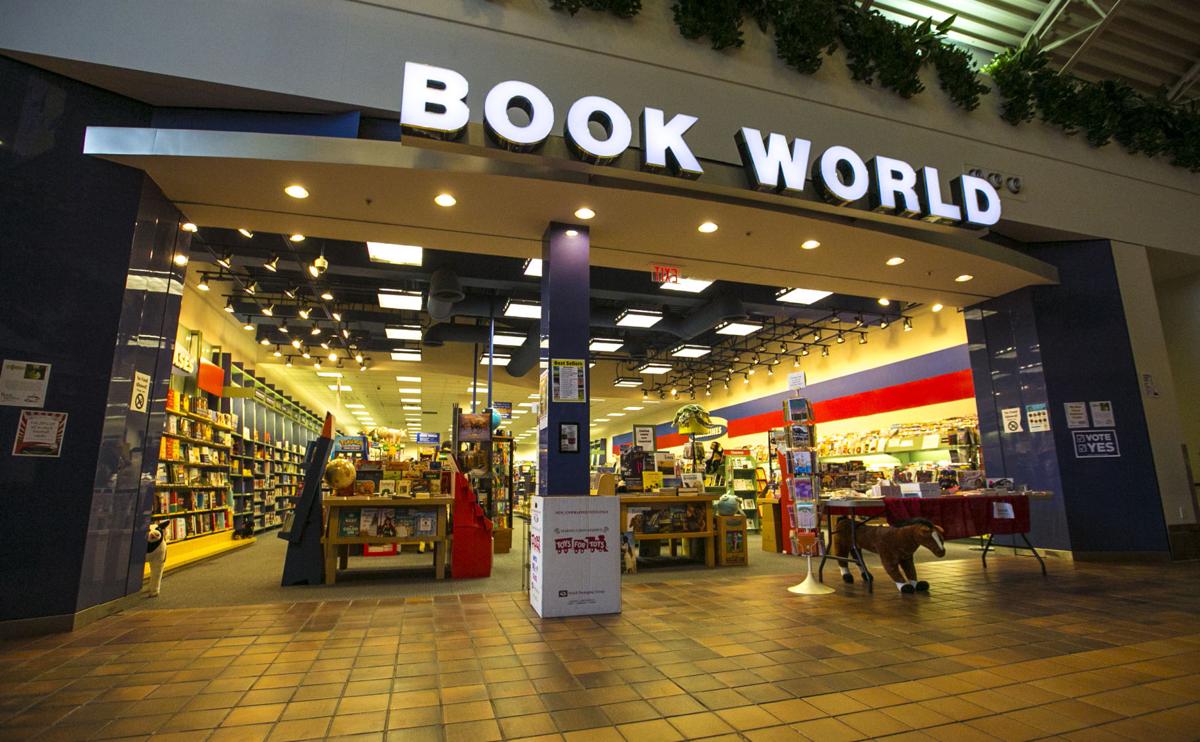 It is only going to get worse.
Free shipping is a big attractant.
Those stores should have entered the online world as well.
Can't fight progress.
Can't beat them, so it would had been best to join them.
Eventually 3D printing will take a larger and larger role and automation will start to grow exponentially.
The world population continues to expand while progress will eliminate the need for many jobs.
How long that trend will continue is the question....
Last edited: Nov 1, 2017

There are so many vacant shops in my town they are resorting to street markets to bring in more cash. Everyone buys online .

SOUL-DRIFTER said:
It is only going to get worse.
Free shipping is a big attractant.
Those stores should have entered the online world as well.
Can't fight progress.
Can't beat them, so it would had ben best to join them.
Eventually 3D printing will take a larger and larger role and automation will start to grow exponentially.
The world population continues to expand while progress will eliminate the need for many jobs.
How long that trend will continue is the question....
Click to expand...

If they release replicator technology this pattern will accelerate. I can see State providing for all of people's needs in the future after they thin the population.

Toroid said:
If they release replicator technology this pattern will accelerate. I can see State providing for all of people's needs in the future after they thin the population.
Click to expand...

That technology is a long ways away from public use as several before hand technologies are needed to support it.
When it arrives it will be the answer to many problems including waste and recycling, as that will be broken down to simple atoms ready for assembling into whatever is called upon.
Our social system would also need to change as well and as you point out, when that day comes we will probably have significantly less people in the world.

It's estimated that 300 out of 1,100 malls in America will close in the next five years. The big stores like Sears, JCPenney & Macy's are closing their doors.
America's malls are rotting away

The Macy's and Kohls in the city are always busy when i go in to town and shop there...

They just sold all of Australias Westfield stores for $33 billion dollars to European property giant Unibail-Rodamco.

FOX Business continues to tally a list of some of the top retailers to close stores.

Facing declining sales, the once-prominent fashion brand announced last March that it would close 60 of its U.S. stores with expiring leases during its 2017 fiscal year. The chain has closed hundreds of store locations over the last few years while placing an increased emphasis on online sales.

The New Jersey-based women’s footwear company filed for bankruptcy last year and announced plans to move forward with a “significant reduction” of its retail locations. While it’s unclear how many of Aerosoles’ 88 locations will be affected, the chain said it plans to keep four flagship stores in New York and New Jersey operational, NJ.com Opens a New Window. reported.

A fashion brand known for its edgy offerings, American Apparel shuttered all of its 110 U.S. locations last year after filing for bankruptcy. The brand has since been acquired by Canada-based Gildan Activewear, which acquired its intellectual property in an $88 million deal.

The Los Angeles-based brand listed liabilities of more than $500 million when it filed for bankruptcy last February. The chain closed 118 store locations nationwide last year, though more than 300 remained in operation under a company-wide reorganization.

The women’s apparel chain closed all of its remaining 168 stores by last May, days after it said it was exploring “strategic alternatives for the company” amid plunging sales.

The struggling department store filed for Chapter 11 bankruptcy, according to court papers filed in February. The chain, which operates 256 stores in 23 states, also announced it plans to close 42 stores in 2018 as part of a restructuring plan.

A fixture at shopping malls, the children’s clothing retail said it will close hundreds of store locations by 2020 as part of a shift toward digital commerce.

The pharmacy retailer said it would close 70 store locations in 2017 as part of a bid to cut costs and streamline its business. CVS still operates thousands of stores nationwide.

The sports retailer told investors on March 1 that it would shutter about 110 stores in a push to focus on higher-performing store locations while also opening about 40 new stores. Foot Locker closed more than 140 stores globally last year.

"We continue to prune the fleet of under-productive stores and open a few select, high-profile stores," CFO Lauren Peters said in a call with investors.

Guess announced plans to close 60 of its struggling U.S. store locations in 2017 as part of a plan to refocus on international markets.

The kids clothing retailer confirmed last July that it would close 350 of its more than 1,200 store locations to streamline its business and achieve “greater financial flexibility,” according to CEO Daniel Griesemer.

The electronics retailer said it would close all of its 220 stores and lay off thousands of employees when it failed to find a buyer after bankruptcy proceedings.

The preppy icon, which once thrived under the direction of retail guru Mickey Drexler, is thriving no more. During a November conference call, COO and CFO Mike Nicholson said the number of planned store closings will move to 50 up from the 20-30 originally announced. "We are committed to driving outsize growth with strong e-commerce capabilities complemented with a more appropriately sized real estate footprint” said Nicholson as reported by Fashionista.com. Opens a New Window.

The department store chain closed 138 stores last year while restructuring its business to meet shifting consumer tastes. The retailer also announced plans to open toy shops in all of its remaining brick-and-mortar locations.

After a brutal holiday season in 2016, the clothing chain closed all 250 of its physical stores last January as part of a bid to focus on ecommerce. The closures reportedly resulted in the loss of about 4,000 jobs.

The major retailer said this month it would shutter an additional seven stores that were previously undisclosed and lay off some 5,000 workers as part of an ongoing effort to streamline its business and adjust to a difficult sales environment.

Macy's says it has now revealed 81 of the 100 store closures it first revealed in an August 2016 announcement.

With same-store sales plunging, the upscale fashion retailer said it would close as many as 125 stores to adapt to a difficult, promotional sales environment.

The discount shoe retailer filed for bankruptcy last April and has moved to close about 800 stores this year.

The once-prominent electronics outlet shut down more than 1,000 store locations earlier this year. The brand now operates just 70 stores nationwide, down from a peak of several thousand.

The specialty teen clothing retailer confirmed last April that it would close up to 400 of its more than 1,100 locations and later filed for bankruptcy last May.

Sears Holdings is one of the most prominent traditional retailers to suffer in a challenged sales environment. The brand shuttered 35 Kmart locations and eight Sears stores last July and has closed more than 300 locations last year amid pressure from ecommerce outlets, USA Today Opens a New Window. reported.

The venerable toy outlet filed for bankruptcy last September amid mounting debt and pressure from wary suppliers. For now, the company says its 1,600 store locations will remain open and operate "as usual," with no changes to organization structure or payroll. Following the 2017 holiday season, the future of the stores remains unclear.

The teen fashion brand shuttered its 171 stores last year after previously filing for bankruptcy in 2015. Declining foot traffic at malls and pressure from competitors like Zara and H&M contributed to Wet Seal’s demise.
Click to expand...

Piss poor planning and strategies in my opinion, many years ago these businesses should have been slowly restructuring and adapting to an always ever changing retail sales economy...Their ignorance and short term greed has led them to this...

I worked at Circuit City for almost 8 years. After they became the number one electronics retailer in the US, upper management shifted all their attention to what was then the Carmax division and ignored the core electronics business. They got their butt kicked by Walmart and Best Buy and eventually the internet.

It's sad because I prefer to buy things at the store but what I want is often not available. I buy most of my stuff online now. Because I'm very tall and thin it's difficult to find clothes in my size at the stores.
You must log in or register to reply here.
Share:
Facebook Twitter Reddit Pinterest Tumblr WhatsApp Email Share Link
Top