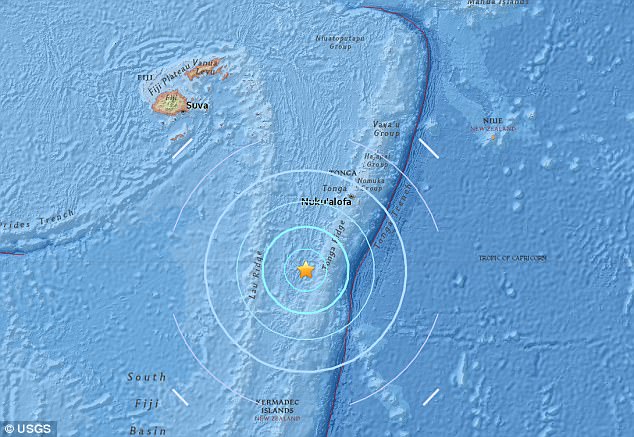 The earthquakes recorded in the 'Ring of Fire'
Tuesday 19th September - 7.1 magnitude in Mexico City

Toroid said:
A 6.5 & 5.1 earthquake struck off the coast of Fiji.
Fiji rocked by two earthquakes measuring 6.5 and 5.1 | Daily Mail Online

They are lucky it was just a 6.5 quake.....the Tonga Trench is the type of fault zone that could generate an 8.5+ magnitude quake sending a tsunami over all the low lying islands. Its a similar fault responsible for the March 2011 quake/tsunami in Japan.

A major earthquake occurred near Fukushima Japan...There was no damage reported fortunately...
.

Powerful 6.3 magnitude earthquake strikes off the coast of Japan

Powerful 6.3 magnitude earthquake strikes off the coast of Japan

Actually that is a strong earthquake....this is the kind of quake that just shakes a lot.....I was in a 6.5 when I was a kid.

This is the kind of quake Japan is ready for.....however, I do not think Saint Louis or Memphis would fair as well.

Strong quakes in Java is not a rare occurrence as it is along an active subduction zone......and is capable of much worse.

A 7.9 earthquake struck in the Gulf of Alaska triggering a tsunami warning.
Tsunami alert after 7.9 earthquake off southern Alaska | Daily Mail Online

A magnitude 7.9 earthquake in Alaska has triggered a tsunami warning

Sounds like earthquake codes need some work.......or it was an older hotel.

Castle-Yankee54 said:
Sounds like earthquake codes need some work.......or it was an older hotel.
Click to expand...

Are earthquakes typical for Taiwan?...

nivek said:
Are earthquakes typical for Taiwan?...
Click to expand...

Yes they are common......the island is near the end of the Philippine Trench and close to the ring of fire in an active tectonic zone.