The upcoming animated film Injustice tells the story of a world where Superman goes off the rails after the Joker kills Lois Lane and his unborn child. This leads Batman to lead a fight against a newly despotic Man of Steel. But before the two “World’s Finest Heroes” became bitter enemies, they were the best of friends. Along with Wonder Woman, this version of the “DC Trinity” led their Earth’s Justice League. But when tragedy strikes, their world is forever changed.

In this exclusive clip from Injustice, we see Batman (Anson Mount) in Metropolis, following a lead on the Joker. He’s taking out a bunch of thugs in the process. He encounters Superman (Justin Hartley), who has some big news to tell the Dark Knight. You can watch the scene from Injustice right here in our exclusive clip:

One thing fans notice right off the bat (no pun intended), is that Kal-El’s costume, even before he goes full dictator, has a high collar. This look suggests he’s already leaning towards a more militaristic, even fascist approach to policing the world. It’s our first indication that this Superman is not exactly the same Superman we’ve always known. And Bruce might get a little gruff with Clark, but you can tell from Anson Mount’s performance that he genuinely does respect and care about his Kryptonian BFF. 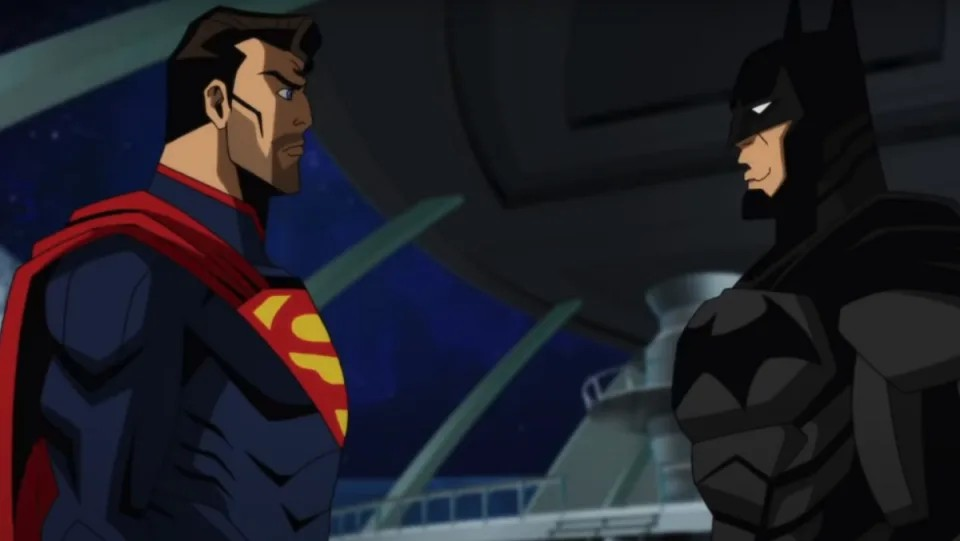 Injustice features a plethora of DC Comics characters in leading roles, from all across the Multiverse. Aside from Batman, Superman, and Wonder Woman, there’s Shazam, Harley Quinn, Nightwing, Green Arrow, Mister Terrific, Plastic Man, and some other surprise DC characters. Injustice will have a segment at the upcoming DC FanDome event on October 16, which is sure to have several surprises in store.

wwkirk said:
I only follow superheroes in TV and film. I never realized how whack job comics have become.

Either this trend will end, or comics will shrink so much as to become rare. I say this because I doubt the SJW-Comic Fan overlap is large enough to sustain a robust comics industry.
Click to expand...

I didn't realize either until recently...I read comics at times but only comics of the classic Marvel and DC characters...I won't read ones such as the female Thor or woke Captain America comics, not going to waste my time with stuff like that...Only recently have I been reading DC comics, I used to only read Marvel...

Keeping in mind this is a CW show... 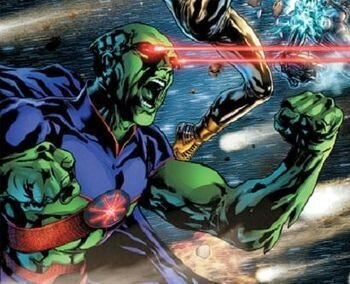 I miss seeing J’onn J’onzz/ the Martian Manhunter from the Justice League of America. This character has always been under used in the DC Universe.

Here's a clip from Assault on Arkham, the Joker and Deadshot have a stand off...

I don't know when I'll watch Eternals, not in a big hurry, but I'm looking forward to the upcoming Spider-Man movie, I think it's going to be spectacular...

Marvel had been on a 25-movie streak of good reviews, and you might’ve thought that streak was as inevitable as Thanos. But the critics have spoken about the new film Eternals, and now more than Thanos has snapped. Eternals has dipped below the 60% Fresh mark on reviews aggregator Rotten Tomatoes, becoming the first flick in the Marvel Cinematic Universe to earn the dreaded green splat.

Rotten Tomatoes is a far-from-perfect website, though it’s influential enough that even people who hate it have to reckon with its scores. It sets 60% as the red line between fresh and rotten, and as of this writing, Chloé Zhao’s Eternals sits at 57%, far below the previous worst-reviewed MCU entries The Incredible Hulk (67% fresh) and Thor: The Dark World (66% fresh).

Eternals boasted an Avengers-sized super-cast but without The Avengers buildup or backstory. Instead, it pinballs between exposition and action, making two hours and 37 minutes feel simultaneously too long and too short. In his ‘C’ review, our own Ben Kaye wrote,

“There are too many questions left in the yawning holes of exposition here to make a satisfying movie, let alone a fully fun Marvel flick. Zhao does what she does best, but it doesn’t work for this story. Why focus on the intimate relationships between 10 super-beings when the reasons behind their desire to save a race they’ve largely hid from for millennia is far more engrossing? Saved from bottom-of-the-pile MCU status by a handful of strong choices, plus final and post-credits scenes that — amazingly — line up a potentially exciting sequel, Eternals is a rare case of its parts not equalling a Marvelous sum.”

Of course, Eternals sets up at least one sequel and fits into Marvel’s broader Phase Four plans, so many diehards will see it anyway. And despite this hiccup, there’s plenty of exciting superhero content headed for this multiverse. Spider-Man: No Way Home swings into theaters December 17th, and that will be followed in 2022 by Doctor Strange in the Multiverse of Madness, Thor: Love and Thunder, and Black Panther: Wakanda Forever.

For me its the first Avengers movie, it's also one I've rewatched the most out of all the other MCU movies...Sometimes I'll just watch the finale starting when the portal first opens lol...

I don't think this is a spoiler, just noting a Marvel character that is in the movie Venom let there be carnage...I'm watching this movie right now lol...


Shriek (Frances Barrison) one of the Sinister Six members is in the new Venom movie, they race changed her in the movie from being a white woman in the comics to a black woman in the movie...
...

A large percentage of modern superhero media is dark in mood, sometimes embracing tragedy. That's okay, but I also like the some of the lighter stuff. I recently watched the entire Justice League Action series. It's a lot of fun. It consists of short 11 minute episodes, and even shorter 3 minute Shorts. It tends towards the comedic side, and each episode is independent.

After finishing that, I searched for something similar and found Batman: The Brave and the Bold. It's more serious than Action, yet still light as opposed to dark. But the best part is that each episode consists of a superhero team-up! It's almost like a Justice League "spotlight".

I was aware of Brave when it first aired, but it was during a period that I wasn't interested in superheroes. (That's also why I didn't see Smallville when it was on the air.)

wwkirk said:
(That's also why I didn't see Smallville when it was on the air.)
Click to expand...

I've not seen the entire series of Smallville, only a handful of episodes...I may venture into that world sometime soon...

nivek said:
I've not seen the entire series of Smallville, only a handful of episodes...I may venture into that world sometime soon...

I'm just a few episodes from completing the whole thing. Upon doing so, it will be the longest series I ever watched all the way through.

As part of Disney+ Day, the studio announced Friday that it will resurrect the beloved '90s cartoon X-Men: The Animated Series on the streaming platform. In an homage to the show's original run from 1992-1997, the new series will be called X-Men '97, picking up right where the heroes and villains left off. 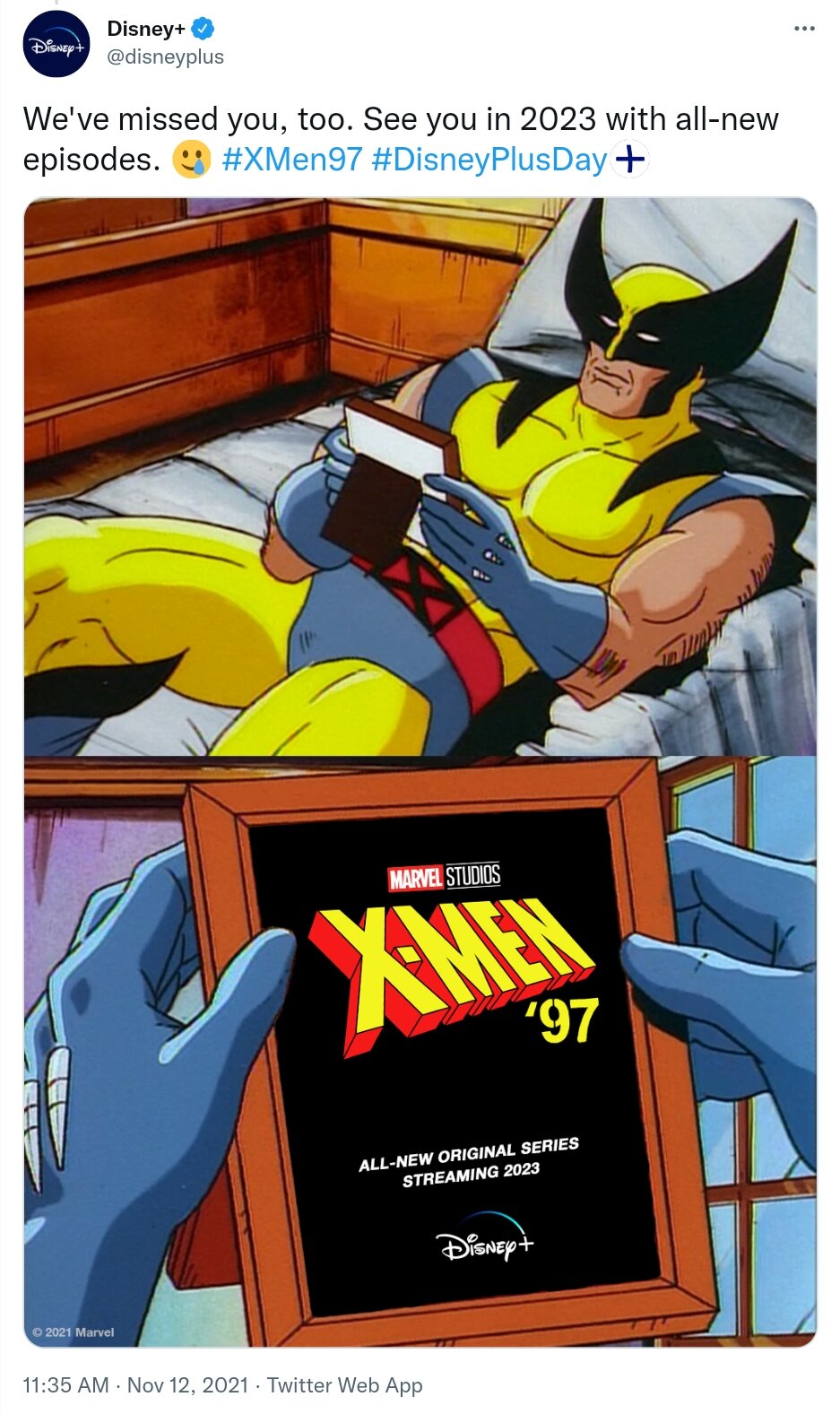 I have just completed the 10 seasons of Smallville!

It was a fun ride. To this point I have never experienced TV at such depth. Hardly any of the episodes were less than good. The vast majority were 8.0 and above. The finale was also well done in closing the book on the Smallville phase of Superman's life, and laying the foundation for the future.

Through the course of the 10 seasons, 102 characters were imported from the comics (sometimes with significant modifications). There was even a version of Krypto. There were a few original characters as well, the most important being Chloe Sullivan.

Overall, Smallville has to be among the 3 or 4 best television shows I've ever watched. The appreciation of it is also enhanced by the existence of the highest quality, most comprehensive Fandom-Wiki Site I have ever come across.

wwkirk said:
I have just completed the 10 seasons of Smallville!

It was a fun ride. To this point I have never experienced TV at such depth. Hardly any of the episodes were less than good. The vast majority were 8.0 and above. The finale was also well done in closing the book on the Smallville phase of Superman's life, and laying the foundation for the future.

Through the course of the 10 seasons, 102 characters were imported from the comics (sometimes with significant modifications). There was even a version of Krypto. There were a few original characters as well, the most important being Chloe Sullivan.

Overall, Smallville has to be among the 3 or 4 best television shows I've ever watched. The appreciation of it is also enhanced by the existence of the highest quality, most comprehensive Fandom-Wiki Site I have ever come across.
Click to expand...

I think Tom Welling was a good younger version of Superman, he had a certain charm and innocence about him in his portrayal which meshed well with the other actors...Sometime soon I'll start watching this series from the beginning...

wwkirk said:
A TV series, not a movie. The first season of Hit Monkey is available right now on Hulu.

Based on a Marvel comic, the series follows Hit-Monkey, an "unjust" Japanese snow monkey who is mentored by an American assassin's ghost while he damages Tokyo's crime underworld.

I finished episode 1. It sets everything up. Basically, there is a uniquely intelligent and aggressive snow monkey with a unnatural aptitude for utilizing human weapons. He's psychically linked to the ghost of a human hitman due to them both desiring revenge on the same people. It's more serious than MODOK was, but has a sarcastic undercurrent. Also, much anime bloodshed.

George Takei voices one of the characters.

Towards the end of this trailer when Lizard, Sandman, and Electro are all together, look closely at the Lizard, there are two things wrong with that clip....unless...