My Fios subscription is about expire. I will be switching to Optimum because I like them better, but I'm also ready to take an additional, bigger step. I intend on forgoing cable TV per se and just getting broadband from Optimum while simultaneously subscribing to a new Hulu package.

I have already cancelled the bundle I've had with Disney (which includes Hulu) so that I can resubscribe to a new bundle that includes a range of "basic cable" and "local TV" streams. (It's weird. Do TV channels even exist anymore?)

I'm strongly inclined to go with Hulu because it also gets me access to ESPN+. I'm a UFC fan.

How about you guys? Have most of you already "cut the cord"?

I recently got Amazon Prime and on a 30 day trial at the moment...I didn't know it included their streaming services, so something new to check out tonight...I got Prime mainly for the free shipping because I need to order some stuff ongoing the next few weeks, I don't know if I want to keep Amazon Prime or not...

We recently quit dish network and now have 2 roku tvs. We get a lot more stuff to watch and it all comes through the internet. No extra cost unless you want to watch some pay for view stuff. We also have amazon prime and netflix which i dont watch much. Im watching pluto tv right now, some old walking dead shows. It streams great, no lag time and when there is a thunder storm our signal does not go out. We wont ever go back to satellite tv.
https://www.roku.com/products/roku-tv#!

I used Optimum for over 20 years and finally had enough of them. At least right here FiOS is far and away the superior product, including their pricing and packaging.

I have an Apple TV gadget to stream with and use Netflix and Amazon Prime all the time. Hulu was OK and so was Motortrend. I like the $6/month subscription price point but believe it's deliberate - make it low enough and you'll let it run on longer. I paid for a few extra months of Hulu after I got bored with it because of that - just at a low threshold and easy to forget.

Haven't tried it but believe that various local channels are still available for broadcast - have to be I think as an FCC requirement. You can buy new HDTV antennas for this that apparently work similarly to what the old rabbit ears did. Around this area is was a handful of channels transmitting off the Empire State building. No idea how that PFM works now but regularly see a wall full of those antennas.

I used Hulu for a while, same with Netflix, however I prefer to download rewatchable content verses streaming it because then I have it and don't have to be on the internet to watch it...The Stargate series and Star Trek series for example, to me very rewatchable at times and now i have every episode I can watch any of it at my leisure and not have Netflix remove content or Hulu remove content and change things as they often do...

I havent used the Amazon Prime streaming services yet, still on a 30 day trial, but as I mentioned before, I got that Prime service for the free shipping and will likely cancel it in the near future...

I've never paid for cable or satellite television and never will...In the past I didn't watch much television if at all, there were many years in the 90s and early 2000s I didn't own a television set...

I have Optimum, but for Internet only, no cable. When I signed, I was given a free trial to HBO Max, which I never used. It's value is $15 per month. But since I never used it, I never paid any attention to it. Today, though, I noticed that my Optimum bill was significantly higher than before. Upon investigating, I discovered that the last month of the free trial was back in March. But there was still an $8 discount in force for the bill I paid in April. Somehow, the increase wasn't high enough to alert me. But that $8 discount was absent in my prospective bill for next month which triggered the present inquiry. Naturally, I cancelled HBO Max.

This suggests that Optimum/HBO Max could have lulled me into paying full price had they been slick enough to increase the bill by only $1 per month! (The Frog in the Pot Principle)

Although I laugh, I'm starting to realize the need to set up alerts for when various deals, discounts, and trials are due to expire.

wwkirk said:
when various deals, discounts, and trials are due to expire.
Click to expand...

This is why I have nothing to do with those nitwits. My bill was crowding $240/month and trying to understand the web of deals, promos and all that nonsense drove me out the door. Plus, at least here, FiOS is a superior product; vastly improved internet speeds and the clarity of the video is stunning. Bill hasn't changed and I have the option of adding or deleting services as needed. I think we have the 300/300 internet + phone + TV services. About $175/month.

I could easily ditch the TV service and purely stream but my wife isn't too keen on that - a creature of habit.

.... and I gotta have the old phones working. Still use 'em

pigfarmer said:
.... and I gotta have the old phones working. Still use 'em
Click to expand...

Even though you have Verizon, aren't the phones using the same network as the internet? Or is the pre-internet communications network still operational up there? I'm not sure that is the case in NYC anymore.

Hulu keeps sending me emails offering a subscription for 1 dollar a month for the first 3 months...Don't need it, don't want it...I get Netflix free from T-mobile because of my 2 line cellular package with them but I don't watch Netflix much...I don't pay for television service of any variety but I don't watch much television anyway...When I do have the TV on I'm either streaming content from my Firestick or viewing something from my large library of movies or TV shows thats on my home server which is not connected to the internet...

Recently I stopped using Amazon prime since their monthly rate went up to 16 dollars a month...

I've been using SirusXM in my car, they gave me a 6 month free trial subscription that renews in August and jumps to 24 dollars a month but I will cancel that service before I start getting charged...SirusXM is okay, no complaints but I don't want that monthly bill at this time so I'll cancel it when the free trail expires...

wwkirk said:
Even though you have Verizon, aren't the phones using the same network as the internet? Or is the pre-internet communications network still operational up there? I'm not sure that is the case in NYC anymore.
Click to expand...

Well, yes and some no. It's more like a cup of internet with a small shot of telephony in it.

Verizon is still the local legacy 'phone company' and the Public Switched Telephone Network is routing calls as always. I can pick up the old Western Electric rotary phone next to me and it still works exactly the same. If I dial 911 the location is supposed to be correct At one time it was the primary method for public communication and now it's taken a back seat to everything else. Broadband delivers so much that it is much simpler to put a phone jack on the back of the equipment Verizon installs at your house and provide the legacy dial tone service than it would be to maintain the archaic copper wires that used to. Around here many are cut and dangling or coiled up. Cable providers do the same thing it's just they're using yesterday's technology to get it to you.

Just downgraded my Hulu subscription. It will save me $60 per month.

I eliminated "Live TV" because I never, ever watch TV live. Without exception, I wait at least until the next day to watch any show.
In the rare case of breaking news I may want to watch, I'll just do so directly from a news station's website.

It's funny, because I was just sleepwalking with my prior sub, not giving it any thought. But then they bumped the price up by 5 bucks and it got me thinking.

I bought a payphone today, an original one, and in great shape...

nivek said:
I bought a payphone today, an original one, and in great shape...

It looks like this one in the picture below, I'll take a couple pics tomorrow of the payphone I bought...I was moving machinery out of a place that went out of business and saw the payphone hanging in the wall in the breakroom...I made an offer for it and my offer of 50 dollars was accepted lol... 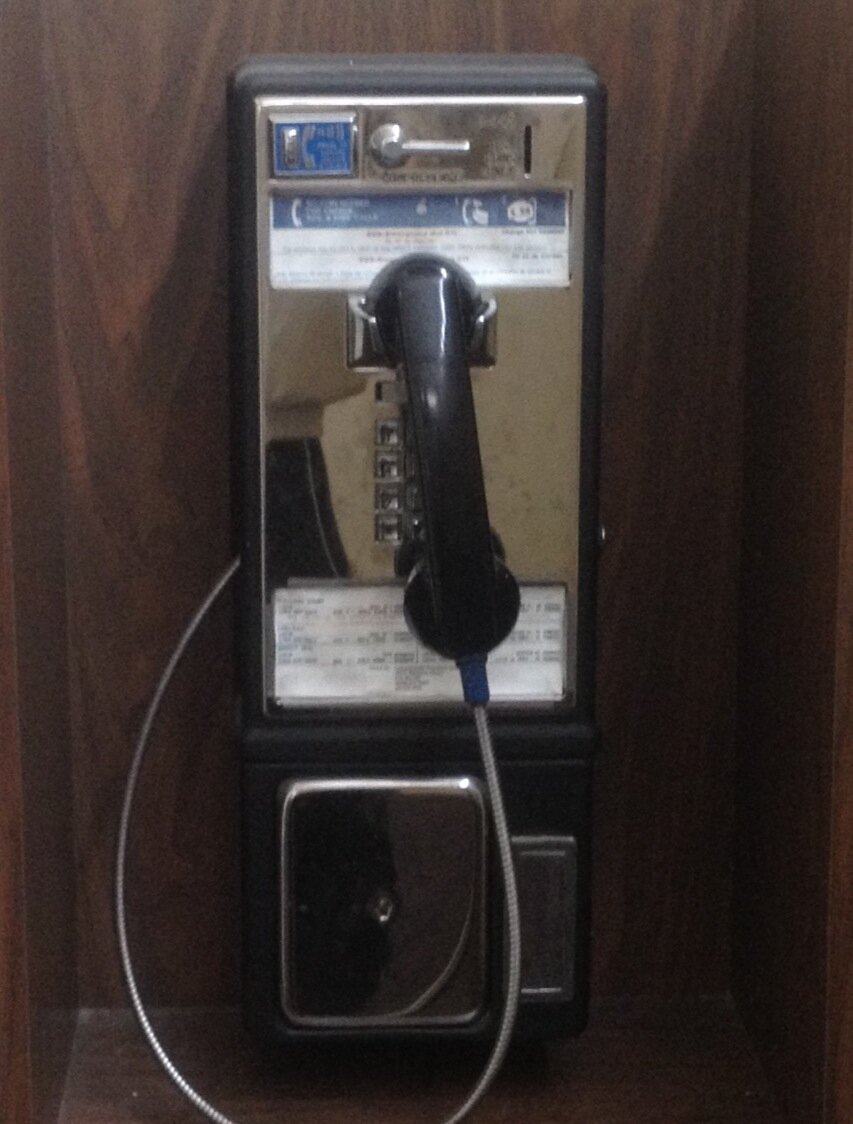 nivek said:
It looks like this one in the picture below, I'll take a couple pics tomorrow of the payphone I bought...I was moving machinery out of a place that went out of business and saw the payphone hanging in the wall in the breakroom...I made an offer for it and my offer of 50 dollars was accepted lol...

Are you going to hook it up and use it as a piggy bank, or is it just to be a nostalgic decoration?

Very cool !! Love old phones. Can't tell if it's a Western Electric or Northern Telecom - those two made most of them in our part of the planet. The service person was not the money collector so probably there's two different keys: one for the coin box and the other for service. You can get coin boxes & keys on eBay if you want a piggy bank. That's what is sitting next to it in the pic.

This one came right off a pole on the mean streets of Port Chester, NY. The guts date back to the 60s. They're modular and can be reconditioned and upgraded, and were. Bought it for $100 from the guy I know who happened to be standing right there when Verizon came along that day........ 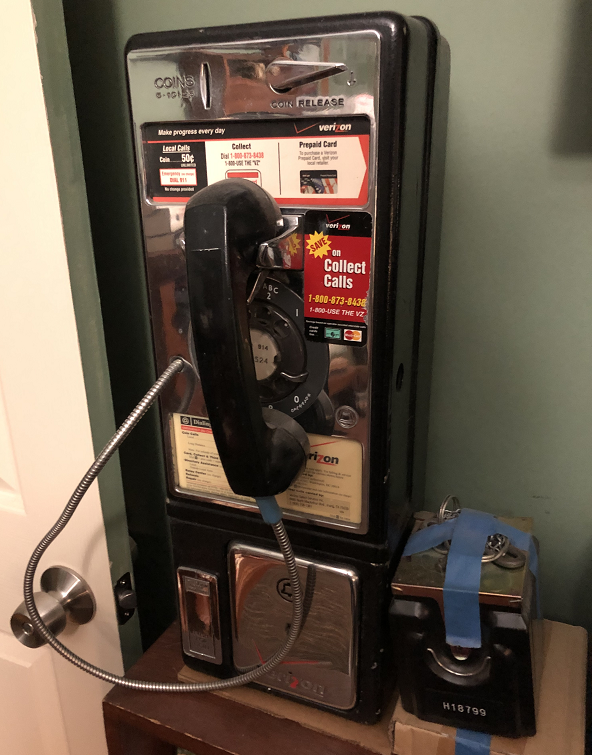 wwkirk said:
Are you going to hook it up and use it as a piggy bank, or is it just to be a nostalgic decoration?
Click to expand...