Trump has lashed out at North Korea because of reports they have achieved miniaturized nukes that can be put in missiles.
Trump: North Korea faces 'fire and fury' if nuke threat continues

China voted for sanctions against North Korea and told them to stop causing problems...

The whole NK thing is moving like clockwork as if an orchestrated script.

North Korea in the bible code. Strange that I couldn't copy the image in the link or from Google images.
North Korea’s Nuclear Tests May Set Off Apocalyptic War of Angels, Warns Bible Codes

Using a special computer program to help him find these codes, the rabbi found the words ‘Tsafon Korea’ (North Korea). The message became even clearer as the rabbi found the letters aleph, heh, resh, and bet arranged sequentially. These letters form the acronym for ‘Artzot Habrit’ (the United States in Hebrew).

Both of these codes were adjacent to the words ‘Shoah Atomit’ (atomic holocaust). On the same grid of Bible codes, the rabbi discovered the word ‘Gog’, which the he said hints at the possibility that North Korea is the nation that will bring the pre-Messianic war, prophesied to come “from the North”. 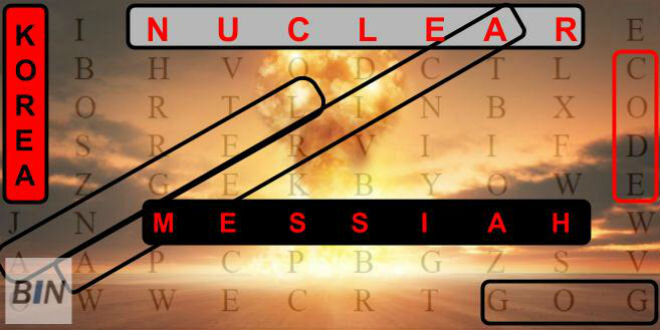 I doubt the UK article because of the source...

Maybe by using those two tabloids they're seeding the concept into the minds of the populace. The Sun's parent organization is News UK & Metro's is Daily Mail & General Trust. If you look at CNN it's all about ratings and the truth isn't a factor.

The Metro and the Sun both published feature length articles today advising the public on what measures to take in the event of “World War III”.
Click to expand...

US Secretary of Defense Jim Mattis warns NK to stand down in their pursuit of nuclear weapons.

Published on Aug 9, 2017
BREAKING: U.S. Defense Secretary Jim Mattis warns North Korea to "stand down" in its pursuit of nuclear weapons.
Mattis says U.S. and allied militaries possess greatest capabilities on Earth, warns North Korea its actions will be "grossly overmatched".
Mattis warns North Korea against "actions that would lead to the end of its regime and the destruction of its people"
Learn More:
https://twitter.com/BNONews/status/89...
Click to expand...

Current and previous issues | The Economist

Something tells me China will deal with the problem once they realize Trumps remarks are seriously intended.
Trump could also pull the plug on some of China's key banks. That could result in an economic free fall for China. That threat would light a fire under China's rear end to get rid of that North Korean nut.

Kim is taking orders from someone. I'm sure China is greatly concerned about potential refugees flooding into their country if a war breaks out. I heard they're constructing bunkers on their side of the border. The whole thing is a powder keg ready to blow. I suspect the eclipse will be a premeditated starting point. There's videos saying WWI started exactly 40 days after an eclipse. Exactly 33 days after it happens on 08/21 will be 09/23/17. There's a lot of talk about something big happening on that date. 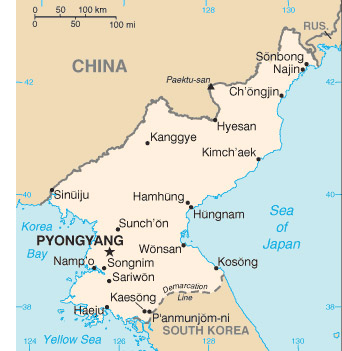 SOUL-DRIFTER said:
Something tells me China will deal with the problem once they realize Trumps remarks are seriously intended.
Trump could also pull the plug on some of China's key banks. That could result in an economic free fall for China. That threat would light a fire under China's rear end to get rid of that North Korean nut.
Click to expand...

I agree SD, China has already voted in favour of sanctions in the UN security counsel and has publicly told NK to stop firing missiles...Trump can and I think he will put a squeeze on China to do more...

Yeah it could happen but one is scared and the other one is glad of it.....I don't think Kim is that far gone he would risk his entire country on a couple of missiles because in the end he will lose I guarantee it.

According to a story they found enormous mineral resources in North Korea. China, Russia & the US want access to them. The staged threat is the theater necessary to get in there. They pulled the same stunt in Afghanistan and still haven't been able to remove the resources after sixteen years.

Trump tells North Korea we're locked & loaded. The US & South Korea will conduct exercises in ten days. The article was dated the 7th and the video has today's date.
Trump says U.S. is 'locked and loaded' in North Korea confrontation

BEDMINSTER, N.J./SEOUL (Reuters) - President Donald Trump issued a new threat to North Korea on Friday, saying the U.S. military was "locked and loaded" as Pyongyang accused him of driving the Korean peninsula to the brink of nuclear war and world powers expressed alarm.

The Pentagon said the United States and South Korea would proceed as planned with a joint military exercise in 10 days, an action sure to further antagonize North Korea. Meanwhile, Russia, China and Germany voiced dismay at the escalating rhetoric from Pyongyang and Washington.
Click to expand...

China will intervene if we carry out attacks on NK or attempt a regime change. They won't take action if NK strikes US targets first.
China will prevent US first strike against North Korean regime – govt daily

China will prevent the US and South Korea from carrying out strikes on North Korea and trying to overthrow the leadership there, but will remain neutral if Pyongyang launches missiles at American targets first, the state-run Global Times said.

The warning, delivered through an editorial in the Chinese state-run newspaper on Thursday, comes as both the US and North Korea continue to exchange incendiary remarks, raising the risk of overreaction or miscalculation amid the crisis.
Click to expand...

Toroid said:
China will intervene if we carry out attacks on NK or attempt a regime change. They won't take action if NK strikes US targets first.
China will prevent US first strike against North Korean regime – govt daily
Click to expand...

Article does not go as far as to say how China will stop a US attack.....

They have enough assets to cause us problems.
2017 China Military Strength

Cosmic Cat said:
Article does not go as far as to say how China will stop a US attack.....
Click to expand...

The last I heard they said that if NK attacks they won't intervene, but if we or SK attack they will, which of course means global war. So they drew a line in the sand and said; "Thalt Shall Not Cross This Line."

Now according to Foreignpolicy.com, the North Koreans have a vast and advanced nuclear weapons program. This means atomic weapons, not thermo-nuclear weapons like the hydrogen bomb, but that they are well on their way to creating that one as well. The Game Is Over, and North Korea Has Won

Regardless of the headless screaming chickens, the reality is that NK is a puppet and buffer to China. It only exists upon the will of the Chinese leadership. Same could almost be said for Japan as a vassal state of the US now. What you have is a bunch of old perverts running a criminal police state for their own pleasure, and inside that state they can do whatever they want, take whatever they want, rape whomever they want, and so forth. Now I ask if this is actually so different form the supposed leaders we've had and other special people running lose throughout the entire Nato Pac?

This is all a game. There's no way that North Korea should be any kind of serious threat by way of missiles. Not only do we have our own anti-missile defense systems, but what about the anti-missile space based and airborne based defense systems? Ya know, it's a long ways from North Korea to Seattle, let alone Kansas City, and we have aircraft that now fly faster than these missiles do. Sure they are still classified but we all know the USAF has them.

Now there's just no threat here unless they want it to be a threat, and that means acts of high treason which would allow the passage of any missile across the vastness to reach any target in the US. For anyone to pretend otherwise is ignore everything we've dumped trillions of dollars into in the Black Budget, and into primitive public propaganda weapons systems which the general public thinks is where their tax dollars actually went to build those acknowledged weapons systems, and which we all know are ancient outdated systems used to hide where our money is actually going. So anyways there's no way for any missile to reach the US, and probably there's none that could or should be able to even get inside the South Korean Defenses. This is all just a bunch of smoke and mirrors and why I'm not sure why that is just yet.